How To Find The Slope Of A Line

Much of science and economics is about the rate of change, often with time. This rate of change is the slope of a graph, spreadsheets make this easy to find.

The cost is 3 times the number of ice creams, which could be written as the equation

where y is the cost of the ice creams and x is the number of ice creams.

We could draw up a table of number of ice creams and how much they cost.

Spreadsheets are ideal for this, for this post I’ve used the free Open Office Calc 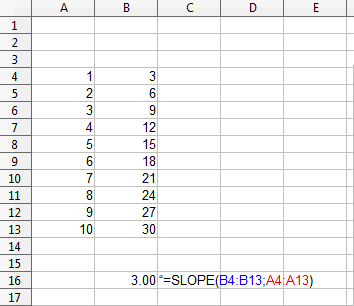 The 3.0 in cell B16 is the slope of the graph, as calculated by the slope function.
In the next cell, C16, I’ve entered the formula as text.  I find it is useful to do this so when I look at the spreadsheet a few months later I’ve got a note to help me remember what is going on.

The spreadsheet will even plot a graph of the line which shows how the cost varies with number of ice creams.  And it will even write the equation of the line as in the graph below

The slope of this line is 3, the number which multiplies x.

The spreadsheet can calculate the slope of a line from a two columns of numbers using a spreadsheet function called slope (as in the example above). 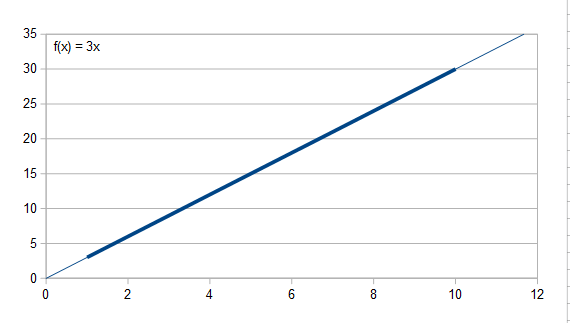 But we knew the number that multiplied x was 3 (each ice cream cost £3).

What about when we have a graph but we don’t know the slope of the line?

Here is a table of values, like the one above, except a small random amount has been added to or taken away from each y value (the cost of the ice creams), the random amount is in column C. 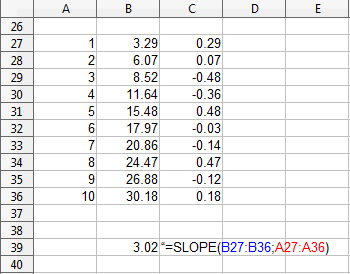 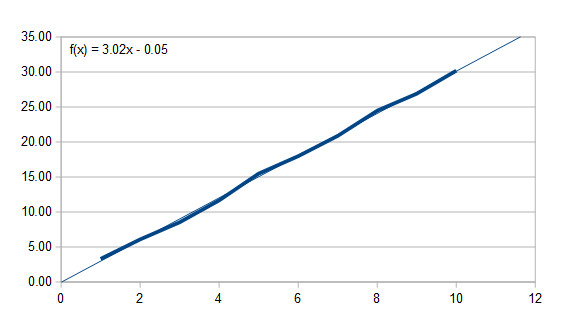 Permanent Service for Mean Sea Level (PSMSL) hold measurements of sea levels from around the world.  Here is a graph of sea levels at Newlyn, Cornwall from 1916 to 2014, sea levels are measured in mille metres(mm). 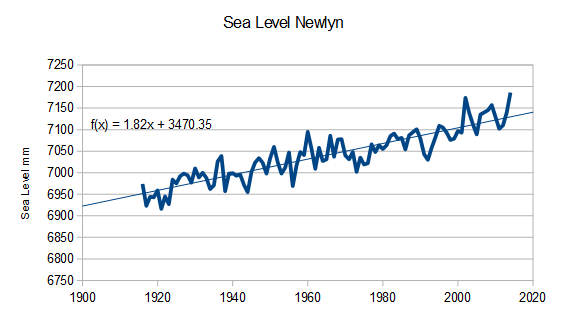 The slope of the trend line is 1.82, which tells us the average rate of sea level rise at Newlyn is 1.82 mm/year.

Indeed you could even ask is Global Warming happening at all given the lack of acceleration in the rate of sea level rise,  given this is a predicted consequence of Global Warming.

So here is an example of how simple arithmetic, the use of freely available data and software tools allows you and your children to check if what you are being told by politicians and the media is true.  In this case it would seem not.

Now I’m going to show you,how you and your children can create the spreadsheet results shown above.  For this first chart I’m going to go through the steps in great detail.  There may seem a lot of things to do but if anyone gets involved in presenting numeric data (at school, college or at work) they will do this sort of thing so often it becomes second nature.

But if you’d rather not do that you can download slopeOfLine.xls

To create the 2 columns of number of ice creams you could just type the numbers in, which wouldn’t be to bad with just 20 numbers.  But there are 2 short cuts. 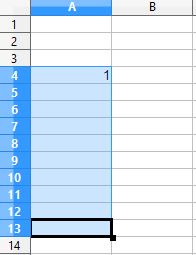 This will open the Fill Series dialog box 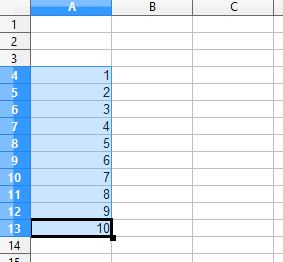 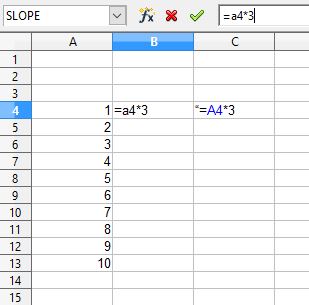 Once you hit return the spreadsheet will display result of formula 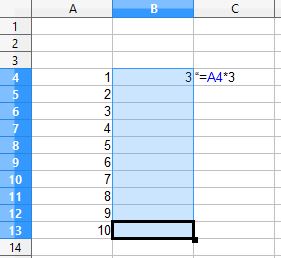 and paste (ctrl + v)
the spread sheet will enter formula in each cell after adjusting the references, so in cell B5 the formula becomes =A5*3. 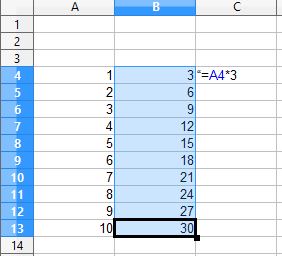 Now we can draw graph with trendline

drag the cursor over cells A4 to B13 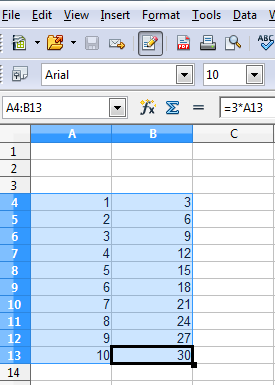 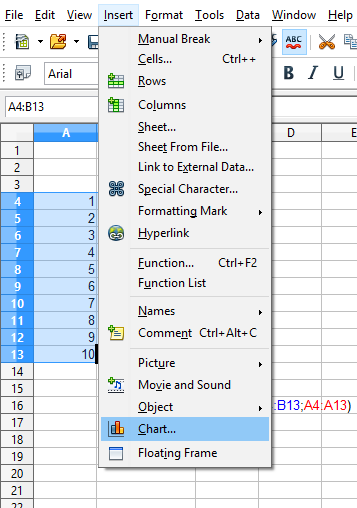 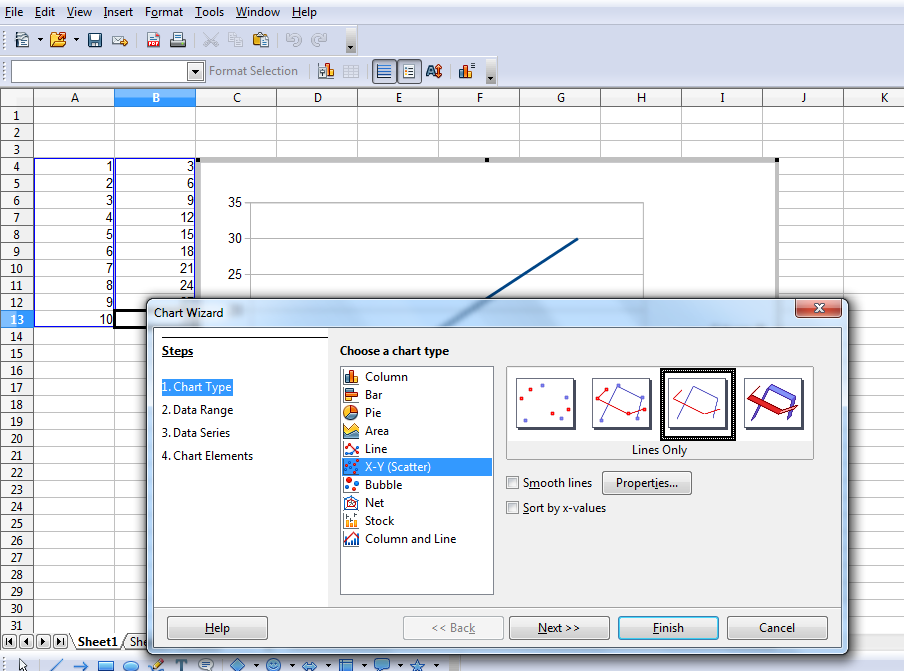 (Note there will be some text displayed to right of graph saying something like
Column B, you can click on this (to select) then press delete to get rid of it).

When the chart is selected you can use the Insert/Trend Lines to insert a trendline. 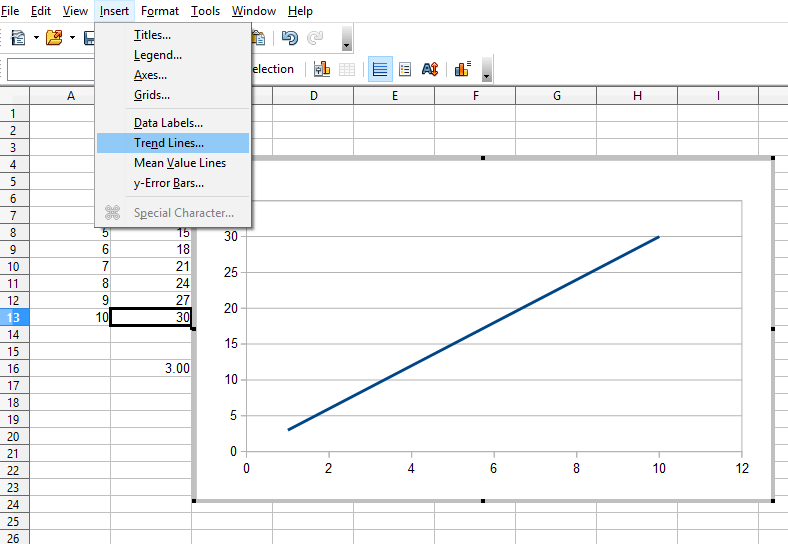 The second graph is very similar to the first so I will briefly describe the steps but point out the differences.

There are a lot of numbers after the decimal point. 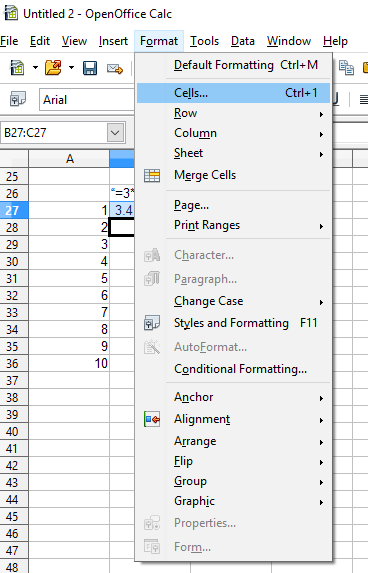 Select Numbers tab of the Format Cells dialog, then the entry which only displays 2 numbers after the decimal point, then click OK. 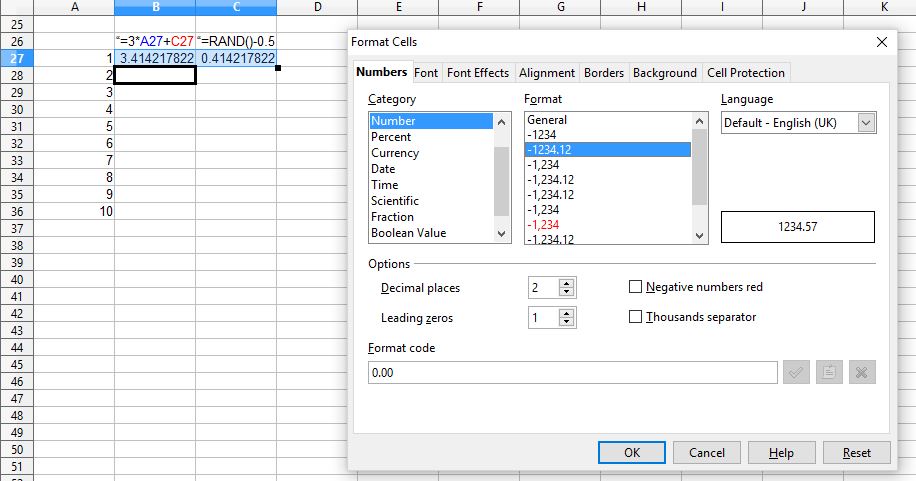 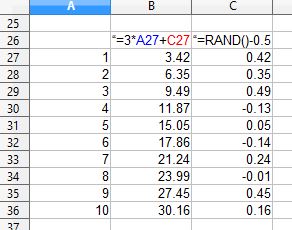 The spreadsheet will recalculate different random numbers each time it recalculates the sheet.  In Open Office Calc, and in most spreadsheets, pressing F9 will cause the sheet to be recalculated.

Now you can select cells A27 to B26 and insert the chart and display the trendline as before.

Despite having set the format of numbers in cells B27 to C36 to only display to numbers after the decimal point, this will not necessarily be the case with the trendline equation.

For the next graph we need to get the annual sea level data for Newlyn from PSMSL.

Otherwise we’ll head over to

If you click on graphic next to the one labelled ALL (i’ve written click here on the image above).

You’ll be presented with a long table which seems to start with Scandinavian countries, then Baltic, Germany, Holland and Britain. British stations seem to start from north east Scotland and proceed  clockwise around the coast.  Newlyn is in Cornwall and numbered 202 by PSMSL. 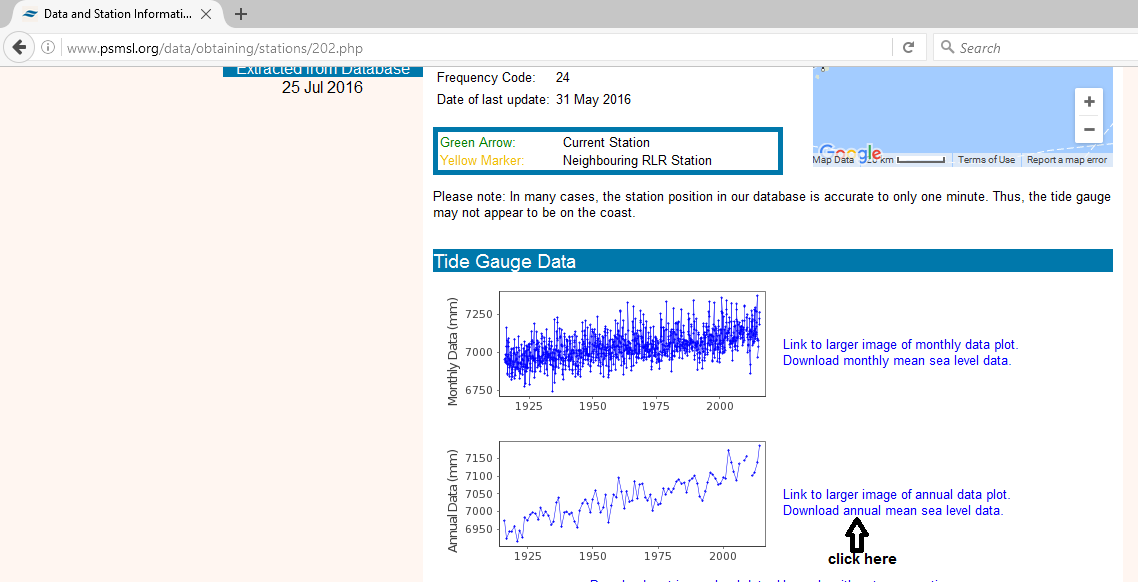 select all (ctrl a)

Head back to a spreadsheet,
click on a cell (e.g. A1)
paste the data for Newlyn (ctrl v)

And you get the data but it’s all in one column.

Select all the rows with data (for me this was A1:A99)
From menus select Data/Text to Columns Ensure semicolon is ticked in Text to Columns Dialog
you even get a preview of your data.
Click OK 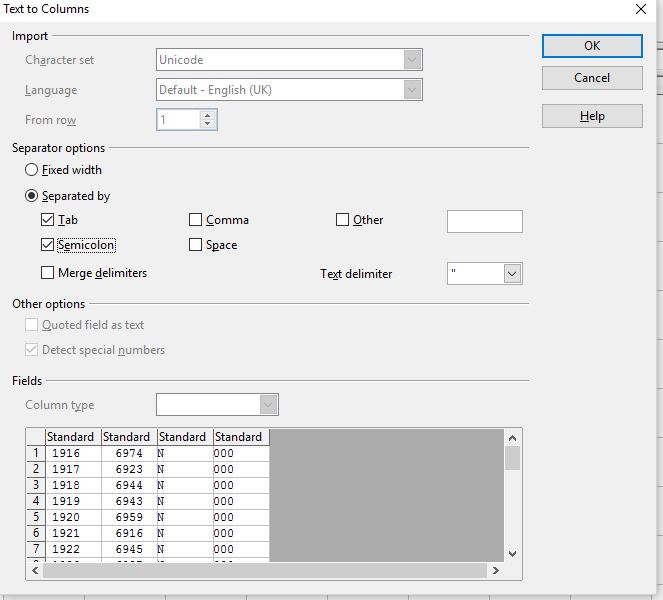 You can either delete the rows or simpler, click in each cell in turn and press backspace key.  This will cause the spreadsheet to think these cells have no data, which means it will ignore these rows if they are included when using slope function or drawing a graph.  You could always leave -99999 in draw graph, use slope function, the get rid of -99999s and see the difference it makes.

Now you can select the cells (A1:B99)
Insert Chart
Add Trendline
And do formatting as before and you will end up with something like

There is a mass of free data available on the internet (all the other stations on PSMSL for a start) so you can grab the data and fit trend lines.

How about this from the wonderful woodfortrees.org

Though you will have to remove the extra lines before and after the data.

Edit the url changing plot for data
and it gives you the data the plot is based on.

Have a go and let me know how you get on.